Pangasius has been a topic of conversation in the industry for at least the last year. The USDA’s initial mandatory inspection date, which was moved to August 2, caused record shipment arrivals into the U.S. in July, adding 34.6 million pounds. Prior to July’s arrivals, the record was set at 27.7 million pounds, or nearly 7 million pounds less. August arrivals came in at 30 million pounds, making it the second highest monthly volume imported of this commodity. So, with back-to-back record monthly imports in July and August, one would assume that prices could fall. Yet, higher replacement costs not seen since April 2012 have pushed wholesale prices in the U.S. to rise sharply this year. According to many U.S. traders, replacement costs will continue to increase due to higher offerings from plants abroad and their affiliates in the U.S. for shipments arriving in December and into Q1 of next year. All this does is place more upward pricing pressure as traders try to pass these increases on to the next level of the distribution chain. 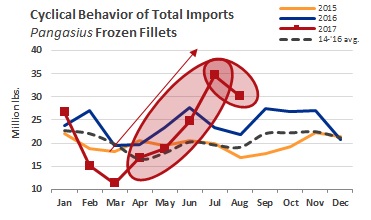 [Reposted from Urner Barry, please find the original analysis here. We do not in any way assume responsibility for the source content]