More than a year from launch, millions of fish have been immunized with Pharmaq’s pangasius vaccine and results show real promise in overcoming some of the sector’s most prevalent  diseases, according to the company’s Asia Pacific director.

Customers have reported both an increase in survival and a reduction in the use of traditional treatments, such as antibiotics. Andreas von Scholten, Asia Pacific director at Pharmaq, told IntraFish.

While estimating improvement of mortality based on production data from commercial farms is difficult as there are many factors that influence on survival, in laboratory studies, survival in vaccinated groups is increased by 60-100 percent after controlled challenges with Edwardsiella ictaluri and Aeromonas hydrophila (*), he said.

“We are currently signing long-term vaccination contracts with major producers, and the implementation of systematic vaccination is considered a significant milestone for the pangasius industry.”

The vaccines have been sold to four major producers so far, but expects growth.

“Vaccination is a new concept for the pangasius industry, so we are developing at the market pace to ensure that the quality of service we provide is not compromised in parallel to vaccination education and training,” said von Scholten. “There is a learning curve both for us and for the customers, and quality assurance in the process is important for successful vaccination.”

Several attempts have been made in the past to develop vaccines for pangasius, but none of them has been successful.

Pharmaqs Alpha Ject Panga 2 (*) is the first approved product that delivers satisfactory protection, said von Scholten. It is the result of 10 years of dedicated research and development working in close cooperation with authorities and pangasius producers.

The economical, practical and biological feasibility of vaccination depends on many factors. First of all the farming practice and environmental conditions need to be at a satisfactory level.

If the farming is primitive and the environment demanding, there may be other challenges that need to be solved before vaccines should be introduced, said von Scholten.

The value of the fish and the ability of the farmers to invest in vaccines and vaccination services are also important factors.

In this sense, the consolidation and professionalization of the pangasius industry, and the vertical integration of the whole value chain combined with an increased focus on quality and sustainability, has contributed to making introduction of vaccines more feasible.

But there is still work to be done. While the bacteria targeted by Pharmaq appear to be the most important, a disease called “yellow flesh” is causing significant losses, with unknown causality. There are also challenges with a wide range of parasites.

During clinical disease and mortality, several pathogens are often found, which makes it difficult to accurately diagnose and pinpoint what is causing the mortality.

While Pharmaq keeps vaccine prices confidential, the vaccine brings value for money, according to von Scholten who cites the increased focus on sustainability, food safety and human health and its drive towards increased prophylactic treatments and less use of antibiotics as a key shift in vaccine demand.

“Switching to vaccines can help improve product image and profitability which is an advantage in the markets,” he said.

“We think the pangasius industry has a great future in their effort to supply healthy seafood. Although prices have gone down somewhat in the last six months, the profit continues to be good and there is optimism among the producers,” he said, adding Pharmaq is seeing an increased focus on breeding, fish health management, biosecurity and quality assurance.

Interest in investment in advanced technologies, such as fish pumps, graders, oxygenation and feeding systems is also increasing.

“The consolidation of the industry and vertical integration makes the industry stronger, and increases its ability to invest in new technologies and market the fish.”

“The consolidation of the industry and vertical integration makes the industry stronger, and increases its ability to invest in new technologies and market the fish.”

“It is important to have a wide focus on fish health and to try to improve it across the industry. This is why we are not only selling the vaccine, but are entering strategic partnerships with customers where fish health services and R&D activities are an important part of the collaboration,” said von Scholten. “Vaccines are just a part of the solution.” 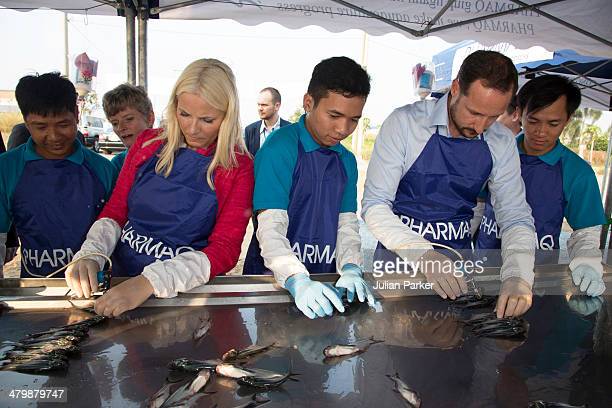 (*): ALPHA JECT® Panga 2 is an injection vaccine that provides protection against the main diseases in the pangasius farming industry in Vietnam, Edwardsiella ictaluri causing white spot disease and Aeromonas hydrophila causing septicimia and hemorrhage.  The diseases occur during the whole production cycle and are associated with high mortalities and great economical losses.